Sometimes the over-licensing of things can get a little old and boring, so when I first read the words “Moleskine Avengers Limited Edition” my brain said “ehh, boring” but then I saw the art work on the covers and did a complete reversal.  Not sure if there is a name for this style of art work, but I really like it for the most part, minus a few minor details on two of them.  Check out the freshly released limited edition Moleskine Avengers series here via Amazon, but move quickly as there are only a few left, although I’m guessing more are on the way. 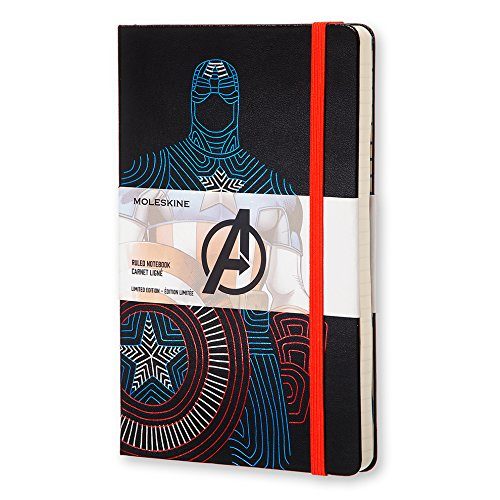 Personally, the Captain American one (via Amazon) is my favorite.  I’m pretty much a huge fan of anything related to the American flag, so this would be my obvious choice.  As with most of their other limited editions these also come with stickers but I have not been able to find any images online or at the Moleskine store.

The Hulk version (via Amazon) made me question my limited knowledge of the Avengers and comics in general when I saw the purple hair.  After some extensive google image searching though it looks like I was right in thinking his hair was black, although I found one or two pictures where it looked like the hair had some purple tint to it.  I’m just assuming it would look odd with black hair on a black cover.

The Thor version (via Amazon) is a little bit of a let down if you ask me.  Why cut off the hammer like that.  You had plenty of space to include the whole Thor hammer, Moleskine. To be honest, I think the Iron Man version (via Amazon) is the only one I don’t really like.  I feel like the lines of the design lose some of the identity and details to really make it jump out and say its Iron Man.  Maybe an actual glowing light in the middle of his chest would be kind of cool and solve that problem.