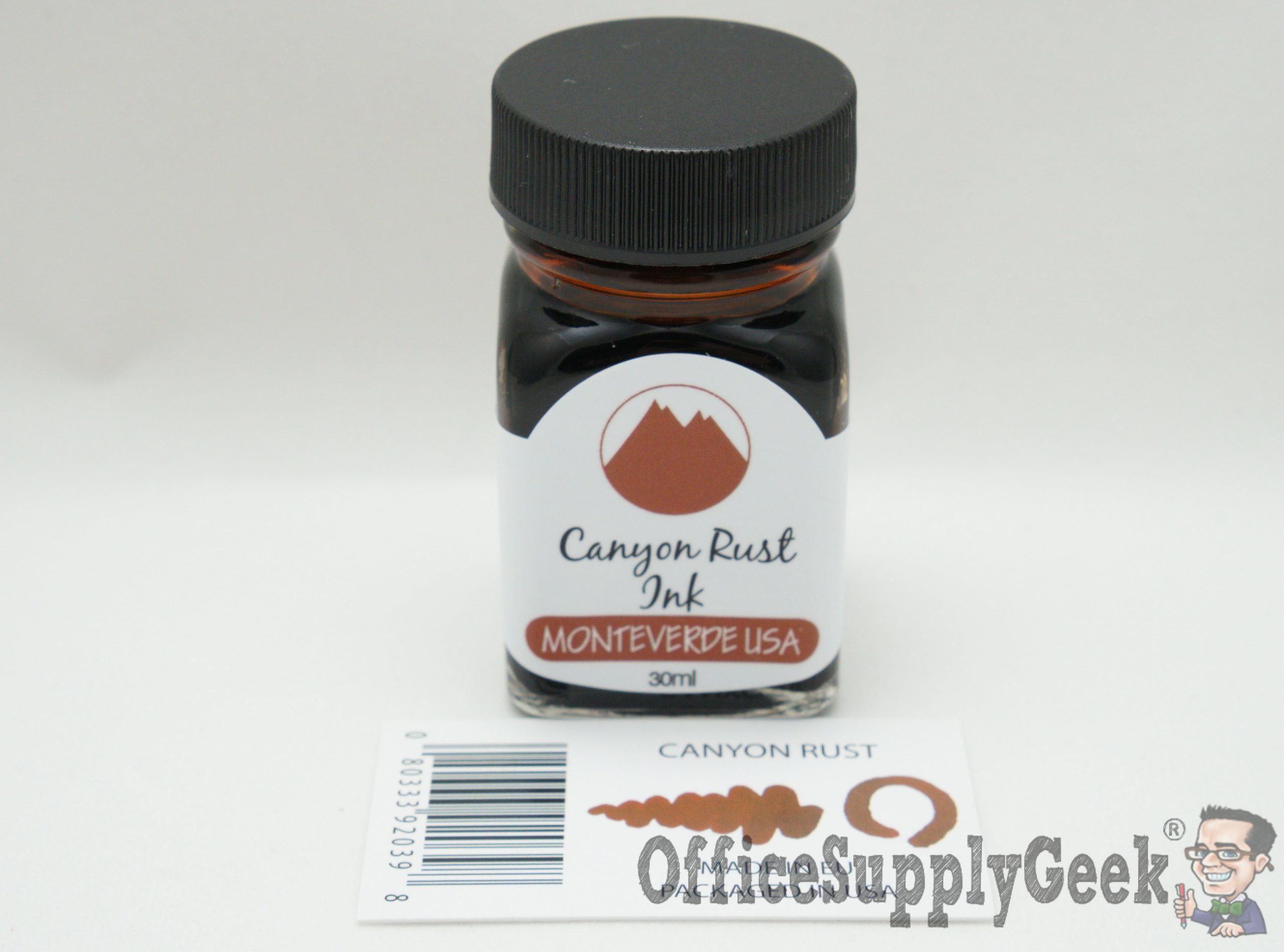 I was excited to pick up this Monteverde Canyon Rust fountain pen ink as part of our sponsorship with JetPens because I’ve been interested in brown lately.  I also haven’t had much experience with Monteverde fountain pen ink at all, and was curious about the IFT features of the ink. Whenever I crack open a new ink, I like to take a look at the color left on the inside walls of the glass as well as the lid if its got a white liner in it.  In this case you can see on the glass, the Monteverde Canyon Rust has a heavy brown color to it with a slight orange/yellow hue to it, which is what I’d expect for something with rust in the name.  I did however think there might be a little more of red tone to it though, but since I was just looking in the bottle, I thought this might change once I started writing and it hit some paper.

I noticed something curious when I set the Monteverde Canyon Rust ink up for the above head on shot without the lid on it.  If you look at the edge of the bottle above the threading as well as on the inside of the neck, there are actual clumps of ink.  I certainly wan’t expecting this since the whole Ink Treatment Formula or “ITF” feature they talk about for this ink is supposed to prevent the ink from clogging and help with a smooth ink flow.  Somehow I missed this when I took the first overhead shot of the ink bottle. I have to say that these clumps of ink were an almost immediate show stopper for me.  Why would I want ink in my pen that clumps up on the bottle?  I found an old fountain pen that I was willing to risk this on, and loaded it up apprehensively.  In my initial writing with an extra fine nib, the ink appeared more of a straight up brown, sans any real “rust” tones to my eyes.  It did offer slight bits of dark and light shading though. The ink swabs and the giant Monteverde logo that I drew with an ink swab both have more of what I’d consider rust tones to them, maybe its some red or orange that I see coming though. I still couldn’t get past the idea that the clumping I saw on the side of this ink bottle might be happening as I wrote with it, but inside of my pen.  I did see a very small number (2 I think) other reviews online that mentioned the ink drying up on people so maybe I just had a bad bottle since there were still other positive reviews.  Oddly this makes me want to try some of the other colors in this line of ink to see what I get.  The color and writing flow were definitely nice, but I just cant get past the sinking feeling that I could have been ruining my pen.  Check out the Monteverde Canyon Rust here on JetPens, as well as the 20+ other colors it comes in.