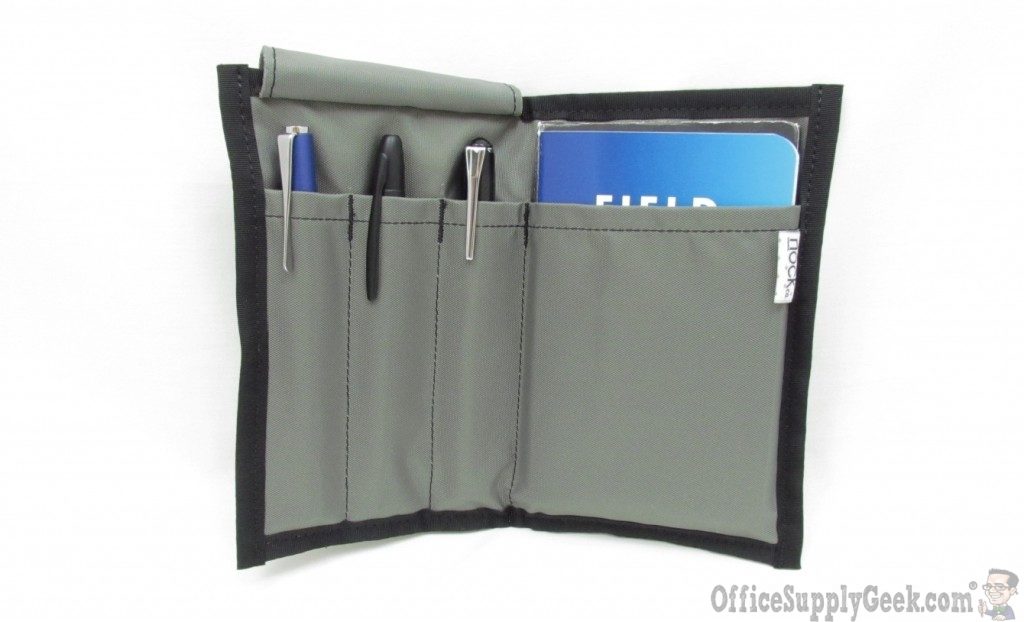 Most of you are probably aware that Brad from The Pen Addict now has his own line of pen cases under the Nock Co. brand name, so today we are going to take a closer look at one of them, the Hightower.  The Hightower is a bi-fold pen case with space for three pens on the left side plus a few notebooks on the right side.  I should also mention the other co-founder of Nock Co. is Jeffrey Bruckwicki who brought his design and textile skills to the table to create these. The Nock Co Hightower Pen and Notebook Case with Label

Much like the pen cases themselves, the lable on the Nock Co. Hightower is simple and understated but well done.  Its simply some Kraft paper wrapped around the pen case with the Nock Co. logo printed on it, and a “Made in the USA” flag sticker holding it closed on the back. The Nock Co Hightower is made from a nice heavy nylon material with DWR (Durable Water Repellent) coating.  The version I picked up has a dark blue body with black trim and they measure 8.5 inches wide (when fully open) by 6.75 inches. With all of my pens safely tucked inside the Nock Co Hightower, I was able to fit 2 Field Notes journals with it still closing nicely.  Adding a third Field Notes journal to the mix seemed to be pushing it.  While the third one fit nicely in the pocket, it prohibited it from closing flat. Now that I’ve had my Nock Co Hightower for a little more than a week, I feel like I’ve put it through its paces and I’m really liking it.  It works well for me because as you can see above it fits nicely into one of the inside pockets of my Tumi Alpha Brovo Pinckney Bag.  I love that its got the slots for the pens, but to me the flap serves double duty by protecting the pen AND the notebook on the other side.  If not for the flap, my Field Notes journal would probably end up with dents or punctures in the cover from the pen clips.  I assume this because I do pack the bag pretty tight and when I’m on the train heading to work I usually have my tablet out and rest on top of the bag while its on my lap so there is some weight and pressure being put on there. The Nock Co Hightower Pen and Notebook Case and a Phone

Now although I wouldn’t necessarily recommend it, you can also use the Hightower to keep your phone.  My Samsung Galaxy S3 fit pretty nicely but its not exactly secure in there and could easily slide out.  If you would otherwise throw your phone in your pants pocket to potentially get banged up by keys or spare change, the whole package like this will fit nicely in the back pocket of jeans or probably the side pocket on a pair of cargo pants. The Nock Co Hightower Pen and Notebook Case Loaded Up

Remember I said you could fit three pens and two Field Notes journals?  Well that was a good start, but in order to make my laptop bag a mobile office supply storage cabinet, I decided to put in some other items that I always have in my bag and that get kind of beat up.  I’ve got one pack of Moleskine StickNotes and one pack of Moleskine Index Cards in the notebook pocket of the Hightower.  They are a good fit because they come packaged in cardboard stock carrying cases and are about the same size as a journal.  I also tuck some nice bright Avery see through sticky notes in the case as well because nothing grabs attention like a neon colored see through sticky note left on someones desk. Nock Co Hightower Pen and Notebook Case Made in the USA

I definitely give the Nock Co Hightower Pen and Notebook case a huge thumbs up.  Not only is it a very versatile and well constructed product to protect and organize your essential items, but its also hand made in the US by an all round good guy.  Well done Brad, well done!  Go check out the Nock Co. website because soon enough these will be available to those who weren’t fortunate enough to get in on the initial Kickstarter phase of manufacturing these.

The beauty of social media, and companies/owners like Brad from @NockCo is that sometimes feedback is almost instantaneous.  In the replies below, Peter mentioned he would like to see some sort of closure on the Hightower that he has.  I figured I would point that feedback out to Brad and NockCo, and sure enough they had a response almost immediately saying that there are designs with closures on the drawing board. Future design considerations…good to know! And thanks to Peter in the comments below for prompting this question/response.