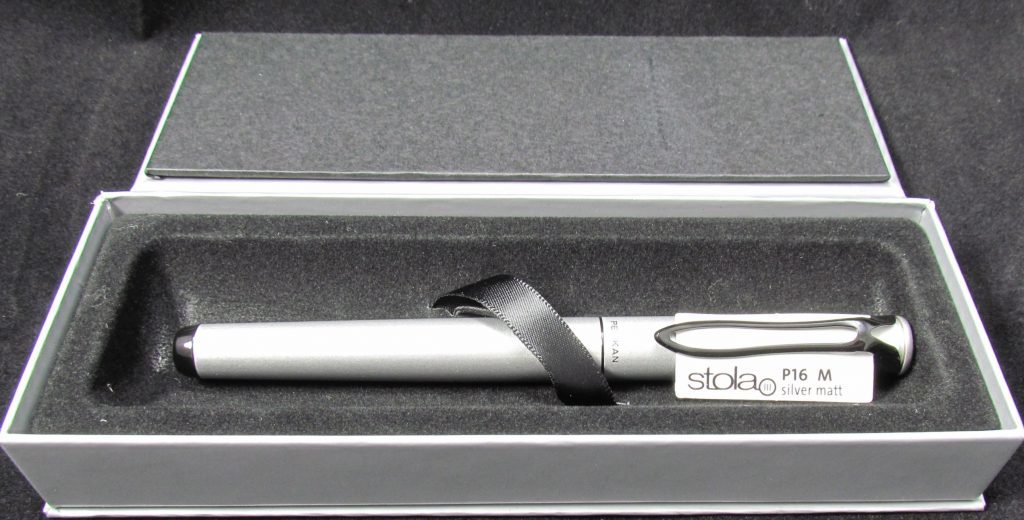 Our friends and sponsor from Pen Chalet offered us the opportunity to take this new Pelikan Stola III fountain pen (via Pen Chalet) for a test drive, and of course it was an offer that was not to be passed up.

In terms of size, the Pelikan Stola III is in the same ballpark as the Pelikan M200 series fountain pens.  Its just a bit shorter with the cap closed, measuring in at 5.25″ and with the cap posted (more on that later) its about 6.125″ long.  Although they are similar in size, there are quite a few differences.  The major difference being that the Pelikan Stola III is mostly made of brass so it is significantly heavier than the 200 series.  The Stola III weighs about 1.115 ounces which includes the weight of an almost full international size converter.  This brings me to probably the two other biggest differences between these two pens. The first major difference is that the Stola is a converter/cartridge filler as compared to the 200 series which is a piston filler.  Secondly, the Pelikan Stola III has a cap that pulls off instead of twisting off as the M200 series does. The nib on the Pelikan Stola III is a simple stainless steel nib with the Pelikan logo etched into it, along with some other decorative flair and of course the nib size itself.  The important thing to note about the Pelikan Stola III nib is that it is NOT interchangeable like many of the other Pelikan fountain pens you may own or have read about.  This is particularly important to recognize since it is also only available with a medium nib, so if you prefer a F or B nib, it won’t work out for you here.  Also of note is that the section itself is made from the same brass base material as the body and cap of the pen.  In regards to the body, section, and cap, the mostly glossy silver metallic finish is highlighted with glossy black accents that I think provide great contrast to the rest of the pen.

The cap on the Pelikan Stola III holds many contrasts in comparison to almost all of the other Pelikan fountain pens out there.  Most noticeable the clip still retains the iconic pelican shaped beak or clip, however its more of a silhouette or outline of the clip shape that you are used to.  Also, the crown of the cap has a printed black Pelikan logo instead of the traditional chrome crown with the logo etched into it.  I think these look great and are fitting as a way to distinguish this as a more entry level Pelikan fountain pen, not to say they look cheap by any means, but they look elegant and simple.  The only downside with the cap in my opinion is that it really does not post well at all.  The plastic collar inside the cap just doesn’t settle far enough down on the body of the pen, and when you start to write with the cap posted it quickly becomes loose and will fall off unfortunately.  For those of you that don’t like to write with the cap posted though, obviously this won’t be much of a concern.

As I mentioned before, one big difference between the Pelikan Stola III and other Pelikan fountain pens is the filling system.  Unlike a majority of Pelikan pens, the Stola III fills via a cartridge or converter rather than utilizing a piston filling system.  The cartridges are your standard international size, and it will also take a full size converter.  It comes with one converter as pictured above, however I had some Pelikan Edelstein cartridges that I wanted to test out with this so the writing sample below doesn’t use the standard cartridge supplied with the pen. So although the Pelikan Stola III is a heavier brass pen, the weight is not a burden at all when writing with it.  I personally enjoy writing with pens that are slightly heavier so take my opinion here with a grain of salt.  Just like every other Pelikan fountain pen I’ve ever used, the stainless steel nib on the Stola III provides a super smooth passage across your paper.  Regardless of ink, I’ve always found Pelikan fountain pens to write a bit on the dry side, and the Stola III also meets that expectation for me with one small hitch which is that it does show a propensity to skip now and then.  I did give the feed and the nib a flushing to see if that would help but it didn’t seem to do the trick.  It wasn’t enough skipping to ruin the writing experience, but it was enough that I did take notice.  Overall the Pelikan Stola III is a durable every day use pen that looks great and provides a writing experience that is what you would expect from such a well respected brand.  Its nice to see this type of entry level pen come from Pelikan, so I would definitely recommend it if you have thought about picking up a Pelikan before, but were unsure due to the higher cost of entry into this brand.  As I mentioned, we got this review sample from our friends at Pen Chalet free of charge in exchange for an honest review, so many thanks to them and you can head over there to see more information about the Pelikan Stola III fountain pen.