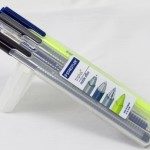 The Staedtler Triplus Mobile Office is a unique set of writing tools that is perfect for keeping in a bag for school or for travel.  This set was given to us for review by Cheryl over at the Writers Bloc website. … [Read more…] 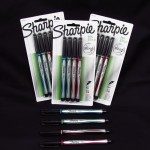 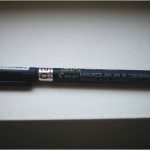 Alex from Economy Pens was kind enough to send over this great guest review of the Pilot Drwaing pen. Browsing through the ‘Felt Tip Marker’ category on JetPens, I came across this, the Pilot Drawing Pen. I haven’t heard too much discussion about this pen, so I decided to add it to my cart in hopes that it would be a new favorite. Sadly, this will go in the kitchen pen cup and will not hold a coveted position in my pen case. Allow me to … [Read more…] 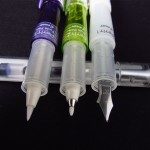 The nice folks over at JetPens sent me over the series of Pilot Petit pens recently and I was initially a bit slow in trying them out but I’m glad I finally did so.  I’ve used the fountain pen version before, but the other two were new to me for this review. … [Read more…] 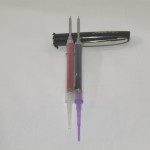 There has been a history of people claiming that their retractable Sharpie Pens didn’t seem to last as long as the original and grip versions of their Sharpie pens, so a little while ago got out the power tools and cut open some Sharpie pens to get to the root of the problem.  I quickly found that the claims were likely true, because I found that the ink cartridges inside the retractable versions were much shorter to accommodate for the inner mechanism … [Read more…] 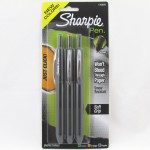 A few weeks ago, there were some new colors (orange, green, and purple) of the Retractable Sharpie Pen released, and with that release I noticed that the new colors also came with an updated body style.  This review will take a look at those same new colors, and in the new body style. … [Read more…] 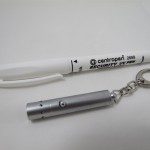 When I saw this Centropen UV Permanent Marker on JetPens, it was almost as if I had no willpower to resist adding it to my cart.  Anything that involves glowing lights, secret messages, and/or being able to prove that someone stole your stuff is a no-brainer, especially at the sub $3 level. … [Read more…] 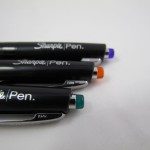 When the new purple, orange, and green retractable Sharpie Pens became available, I jumped on the opportunity to order them up from Amazon, and now that they have arrived, I thought Id share my initial thoughts on them. … [Read more…] 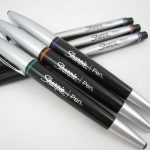 Ever since the popular Sharpie Pen came out, the purple, orange, and green colors have been in high demand, and when the Grip version of the Sharpie pen arrived, there was an almost instant clamoring for these additional colors to be added to the Grip line.  For those of you who have been waiting, the day has finally come, so check out the below review, and at this point…good luck finding some though because they are not easy to come by quite … [Read more…] 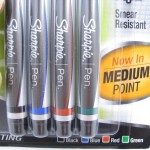 So the other day, one of my readers, wild violet asked me if I had seen the new Sharpie Pen Medium Point, so I immediately set out to find some so I could check them out and write-up a review.  Lucky for me they had a few available on Amazon, so I picked up the 4 Pack of Assorted Color Sharpie Pens in Medium, but they also have 12 packs of blue, red,  and black, as well as 4 packs of blue. … [Read more…] 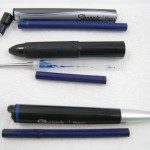 After a bunch of reviews of different Sharpie Pens, and hearing lots of different feedback on the shade of blue and how long ink was (or wasnt lasting) I decided it was time to get to the heart of the matter and crack these suckers open to see what was going on in there.  Lucky for me I happened to have a blue version of each Sharpie Pen on hand to hack apart for your viewing pleasure…or disgust, I can see either side of that argument. … [Read more…] I’ve heard all of this talk of orange and purple Sharpie Pens for a while, and to be quite honest, I was beginning to feel as if they were the unicorn of the office supplies world.  Random sightings here and there, and lots of people saying how awesome they are, but I couldnt find them anywhere.  When I saw the recent review of the orange one over at The Pen Addict, I finally started to accept the fact that they might actually exist. (Update they are … [Read more…] It was not that long ago that I reviewed the Sharpie Pen which I really liked, and it seems to be a pretty popular pen based on the other reviews and feedback Ive seen from other people that appreciate unique office supplies.  The new Sharpie Retractable Pen takes the previous version and makes a few changes in addition to just being retractable.  Before getting started with the review though, I just wanted to thank the folks at Sharpie for providing me … [Read more…] Back in April I was going to do a review of the Pentel Tradio, but I misplaced it and then the next day The Pen Addict did his review so I didnt want to double up and go back to back so I put the pen aside for a rainy day.  With a rain delay holding up the start of the Yankee game, I figured this would be my “rainy day” although Im in NJ and the game is being played in Chicago. 🙂  I picked this up from Writers Bloc for $8, and as a full disclosure, there … [Read more…]