We have reached the final post in this 3 part series on the Uni-ball Power Tank Ballpoint Pen.  The results might be a bit surprising. I managed to successfully freeze all of the pens in a test tube and get some more writing samples from each of them. I also did a quick test to see how each of these pens write on wet paper. One thing I realize that I did not do is compare another ballpoint pen to the Power Tank, I might have to try that at a later date. Now on to the results.

DISCLAMER:I am not a real scientist, so I am sure that any of you out there who actually are scientists could probably poke some holes in my experiment that would invalidate it. In this review, science is whatever I want it to be.  I think I got to fairly realistic results on the Uni-ball Power Tank Ballpoint Pen capabilities anyway.

I decided to do this test with standard notebook quality paper ripped from a 5 Star Notebook since I dont think that most folks would use their Levenger Circa or other notebook that they really care about out in the rain. You can see from the scan below that each of the pens held up relatively well. The Uni-ball Power Tank Ballpoint Pen and G2 both had a little trouble getting started, however once they did, everything was fine. I think the Uniball Power Tank did get started quicker than the G2 based as you can see from the photo. The Pilot Varsity showed some feathering at first that appeared to stop after a few letters. I should note that I can’t isolate the trouble getting started or the bleed from the fact that these pens were just resuscitated from a state of cryogenic suspension. 🙂

Now for the freezer test results!

My biggest fear (besides drilling a hole through my hand) during this experiment was the possibility that one of these pens might explode while in the freezer, which I am happy to report did not happen. After about 2 hours of being in their state of cryogenic suspension (Unlike Walt Disney and Ted Williams) I took the pens out and began to run the writing samples.

First, lets take a look at the Uni-ball Power Tank Ballpoint Pen after being frozen and uncapped so you can see just how much of the body of the pen was frozen. If you look closely you will see some blue specks on the test tubes and on the ice, this is not ink, it is actually the residue from me drilling holes in the blue caps on the test tubes. 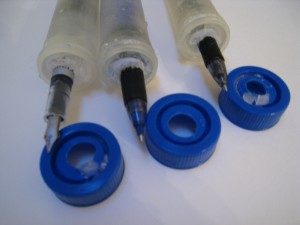 So lets take a look at the writing samples, starting with the results of the Uni-ball Power Tank Ballpoint Pen. As you can see, from the sequential writing samples (all done in a small Moleskine if I had not mentioned that already) there appears to be a very consistent and uniform performance from this pen. The initial writing sample labeled as “under normal conditions” appears to me to be the darkest and most consistent of the bunch. I did notice that in the frozen writing samples, there are a few very small instances where there are thicker deposits of ink such as the bottom of the “B” in “Ballpoint” but those are few and far between, and overall do not detract from the performance of the pen.

The next two samples both surprised me, but I’m not sure which was more surprising, the G2 or the Varsity. I had half expected the Varsity to either explode, or just leak all over the place, but as you can see from the sample image below, this was not the case.

The Varsity wrote almost as if nothing was wrong. You can see that there was some feathering, especially in the beginning of the writing sample, but overall the results surprised me in that there was no significant leaking or mess. I know that this is one point of inconsistency in the experiment because I did not do a regular 32 degree Fahrenheit test, but to be quite honest, I didn’t want to risk leaving a $3 fountain pen to freeze overnight in my car, but obviously that doesn’t look like it would have been a problem. I will say that based on these test results I guess you could get away with leaving it in the car, but i would not recommend it just to be safe.

Now, for the last, and I guess most surprising test result, the Pilot G2. As you can see, the two tests of the pen after it had been subjected to a night of 32 degree temperatures in my car, are pretty impressive. No major issues, the upside down sample is not quite as dark as the right side up, but still very acceptable. The smudges and smearing that you see are not a result of this portion of the test, they occurred when I was doing the next pat of the test.

The last two lines, which you probably can’t read are after the pen was subject to being a pensicle for a few hours in the freezer. As soon as I started writing you could see that the pen just wanted to let as much ink as possible flow out. Both the upside down and right side up tests exhibit poor performance and clearly do not stack up to the results of the Uniball Power Tank or the Pilot Varsity. I am assuming that a Gel based ink has certain characteristics (remember…I said I wasn’t a scientist) that just don’t lend well to being subject to such extreme temperatures.

I think that the Uni-ball Power Tank Ballpoint Pen certainly lived up to the billing that it can perform in some very extreme conditions, and I feel confident and safe leaving this pen in my car even in the worst weather. I am very happy to have bought this pen from JetPens.com and will likely pick up a few more at some point. I do however hope that I never find myself trying to write with the Uni-ball Power Tank Ballpoint Pen stuck in a block of ice because whatever situation causes that to happen most likely won’t work out so well for me and I don’t want everyone’s last memory of me to be that I was found dead clutching a pen in a frozen block of ice.

As for the other two pens, I will be up front and say this review was probably not fair to them, especially since they have never be reported by the manufacturer to be able to sustain such conditions. Both of these pens have their place and do a very good job of doing what they were designed for, unfortunately I just needed some comparison points and those were the two I picked to go up against Uni-ball Power Tank Ballpoint Pen.