The Wampanoag Language: A Tale of Revival

The Wampanoag language is undergoing a revival. The story of the tribe, from which the language gets its name, is a tale of tragedy and rebirth. It’s also fitting for the upcoming Thanksgiving holiday.

Wampanoag was spoken by Squanto, the Native American who helped the Pilgrims through their first harsh winter in 1620. Belonging to the Algic language family, the Wampanoag language comes from Southern New England Algonquian.

Though the language had essentially disappeared by the middle of the nineteenth century, it has since been revived thanks to the Wôpanâak Language Reclamation Project.

To jump directly to a certain section on Wampanoag history, click one of the links below:

Thanksgiving can be traced to a feast attended by Pilgrims and Native Americans in 1621. It included the 50 surviving Pilgrims from the Mayflower and approximately 90 Native Americans. The Patuxet tribesman Squanto, also known as Tisquantum, was among them. 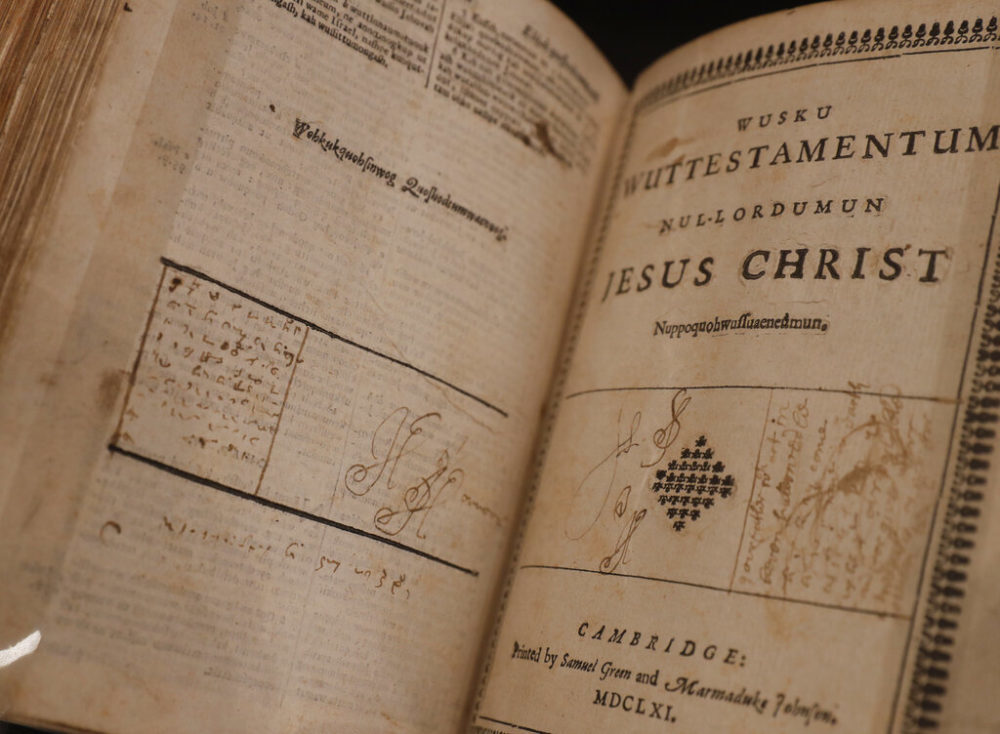 To the Pilgrims’ great relief, Squanto was adept at using fish as fertilizer to grow corn.

Americans know Squanto’s name, of course, because he was instrumental in the early settlers’ survival during the exceptionally brutal winter of 1620. Squanto’s command of English made him the de facto broker between the English colonists and the indigenous people of the region.

How did a native speaker of the Wampanoag language come to know English so well? In a word, slavery. It’s a detail that my third-grade teacher neglected to share with us.

So how did a native speaker of the Wampanoag language come to know English so well? In a word, slavery. In a detail that my third-grade teacher neglected to share with us, Captain George Weymouth, who had been exploring the coastline of New England for English royalty, captured Squanto and four other Native Americans  in 1605. Weymouth took his captives to Plymouth, England, delivering Squanto and two others to Ferdinando Gorges, the English governor of that fledgling town.

Gorges taught Squanto English because he wanted him to serve as an interpreter for future trips to and from the New World. In 1614, Squanto returned to New England with John Smith but was subsequently captured by one of Smith’s underlings and taken back to Europe.

In Malaga, Spain, Squanto and his fellow slaves were rescued by Franciscan friars before they could be sold into slavery. During his attempt to get back to his home, Squanto traveled to London where John Slany, a shipbuilder, taught him more English.

After accompanying Slany on a voyage to Newfoundland in 1617, Squanto was finally able to return to his homeland for good in 1619—14 years after he had been first captured.

But there was no welcome party for him in the New World. Upon returning to the new colony, Squanto discovered that his fellow Patuxet and most of the individuals from two neighboring coastal tribes had died as a result of a plague. Mortality rates were as high as 90%. This blow to the local population had a significant impact on the Wampanoag language. (Not surprisingly, a language is at risk when speakers of that language die.)

Soon after, an Algonquian named Samoset introduced Squanto to the English colonists at Plymouth. The rest, to paraphrase a famous cliché, is Wampanoag history.

A Missionary Man Comes to the Wampanoag

The  language, as Wampanoag goes by many names: Massachusett, Natic, Wôpanâak, and Pokanoket. (Another label was the culturally tone-deaf “Indian language,” which is like referring to Mandarin as “Asian language.”)

Wampanoag is a relative of other languages in the Southern New England Algonquian language group, particularly Narragansett and Nipmuc. For example, compare the Wampanoag word muhshoon (“canoe”) to the Narragansett word mishoon.

It’s important to remember that Wampanoag had no writing system when the colonists arrived. An English missionary named John Eliot, knowing that the best way to convert “heathens” to Christianity was by preaching in their language, learned the Algonquian tongue.

It’s important to remember that Wampanoag had no writing system when the colonists arrived. An English missionary named John Eliot, well aware that the best way to convert “heathens” to Christianity was by preaching in their language, learned the Algonquian language. His teacher was a young man named Cockenoe, who, in Eliot’s words, “was the first that I made use of to teach me words, and to be my interpreter.”

Eliot gets the credit for codifying the Wampanoag language. Working with native speakers, he created an orthography (spelling system) and then taught it to the indigenous peoples. The missionary-cum-linguist Eliot set to work translating the Ten Commandments, the Lord’s Prayer, and other religious texts. His biggest claim to fame is that in 1663 he published the first Bible in the New World. It was in Wampanoag.

English missionary John Eliot published the first Bible in the New World; it was in the Wampanoag language.

The Wampanoag language suffered as the number of speakers dwindled. The 1619 outbreak of disease meant that there were fewer Wampanoag left to hold back encroaching tribes and English settlers.

War took a heavy toll as well. King Philip’s War (1675–1676), the French and Indian Wars (1688–1763, intermittent), and the Revolutionary War (1775–1783) all saw the participation of Native Americans, many of whom died. With the male population decimated, many Wampanoag women ended up marrying outside of the community, which contributed greatly to the decline in the use of the language.

Spoken Wampanoag was still common in the area of Martha’s Vineyard and Nantucket well into the middle of the 18th century. But by 1798, only one Wampanoag speaker remained in Natick (a town about 20 miles outside of Boston). On the island of Nantucket, the language survived until 1855. On Martha’s Vineyard, the person believed to be the last fluent speaker of the Wampanoag language died in 1890.

In 1907, an anthropologist named Frank Speck attempted to find Wampanoag speakers in the town of Mashpee (on Cape Cod) but was unsuccessful. The best he could do was compile a list of 20 Wampanoag words from elder individuals whose parents and grandparents had spoken the language.

Considering all of the above, it’s no surprise to see Wampanoag listed in Google’s Endangered Languages Project.

A screenshot from the interactive map of Google’s Endangered Languages Project. (Click image to explore.)

In 1993, a woman named Jessie Little Doe Baird started what would become a modern revival of Wampanoag. While completing her master’s thesis in Algonquian Linguistics at MIT, Baird began to learn the grammar and vocabulary of Wampanoag from early texts: the Bible, religious tracts published by Eliot, and even writings from the Wampanoag people from centuries past.

Baird published a grammar of the Wampanoag language in 2000, the same year that she completed her thesis. She immediately followed these accomplishments with another one: founding the Wôpanâak Language Reclamation Project.

A PBS documentary told Baird’s story, though she no longer grants interviews due to her feeling that she (rather than the Wampanoag language community) was getting the lion’s share of media attention. (A video extra from We Still Live Here – Âs Nutayuneân is below.)

The Wôpanâak Language Reclamation Project (WLRP) is a nonprofit organization that seeks to revive and preserve the Wampanoag language, which is a vehicle for transmitting Wampanoag history.

With Baird’s guidance, the WLRP has made big strides in its language-revival efforts. The organization has developed an 11,000-word dictionary, created a curriculum for second-language acquisition, certified 15 Wampanoag language teachers, and offers a summer immersion camp.

According to the WLRP website, the organization plans to open up a language-immersion school, in the fall of 2016. The school will be the result of a partnership with the Montessori Academy of Cape Cod.

To find out more, visit the WLRP’s website. To make a donation to the project, click here.

For a fascinating glimpse into recent Wampanoag history and a revival of the language, check out this 2012 story from WATD’s Katherine Perry.

The Future of the Wampanoag Language

Prior to the Pilgrims’ arrival, Native American languages numbered in the hundreds. Some of those languages still are.

But Wampanoag is the first American Indian language to be revived after having been extinct. This is nothing short of extraordinary. Bringing back languages from the dead is no small feat.

Renowned linguist Noam Chomsky said the following about the revival of the Wampanoag language: “The idea that this could have been done after 100 years is… I don’t think anyone could have believed it.”

Wampanoag is the first American Indian language to be revived after having been extinct. This is nothing short of extraordinary, because bringing back a language from the dead is no easy task.

What will the next chapter of Wampanoag history be? It’s difficult to predict.

But there is hope for the language: A young girl is currently being raised with Wampanoag as her mother tongue, making her the first native speaker of the language since the mid-1800s.